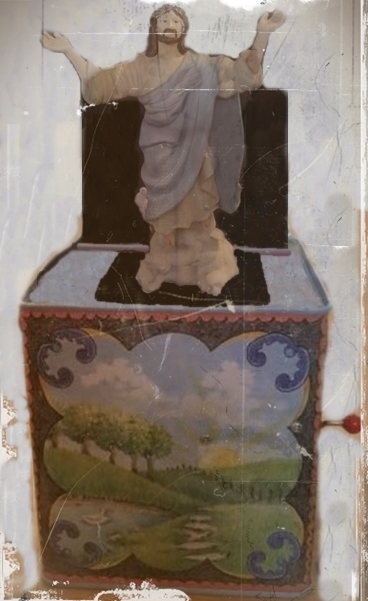 When it comes to certain worldly goods the notion of “handcrafted” normally carries much weight and is viewed as being very desirable. Why?  Because typically anything that is handcrafted implies a level of care, skill, and expertise in the construction of certain products that a machine simply cannot provide.  Anything handcrafted is viewed as “extra special” in this sense.  Not surprisingly people will pay more for such skillfully made items.   After all, who hasn’t paused over the words, “Hand stitched Italian leather” with admiration and desire?

While this rearrangement no doubt makes everyone uncomfortable, as well it should, is there not some degree of truth to be found here if we’re being perfectly honest with ourselves?  When we hold up to the light how we relate to Jesus in our own lives are there not certain areas we either knowingly or unknowingly deem to be untouchable and “off-limits” to Him, or even worse instruct and counsel Him as to how to proceed?  It is in these areas we force our own desired and created reality of who we believe Him to be upon Him.

“For the time will come when they will not endure sound doctrine, but according to their own desires, because they have itching ears, they will heap up for themselves teachers; and they will turn their ears away from the truth, and be turned aside to fables.” 2 Timothy 4:3-4 (NKJV)

Having Him tucked away all nice and tidy in a box with a crank handle that plays a catchy little tune just before He pops back into our lives is, well, so much more comfortable isn’t it?  Seriously now, who doesn’t like the idea of having a God-in-the-box just sitting there on the shelf readily available to us whenever and however we need Him? And when we do that have we not made Him in our own image?

In his book, “Beautiful Outlaw,” John Eldredge muses, “Our experience of Jesus is limited most often by the limits we put on him!”  Indeed.

“Now it came to pass, when Jesus had finished these parables, that He departed from there.  When He had come to His own country, He taught them in the synagogue, so that they were astonished and said, ‘Where did this Man get this wisdom and these mighty works?  Is this not the carpenter’s son?  Is not His mother called Mary?  And His brothers James, Simon, and Judas?  And His sisters, are they not all with us?  Where did this Man get all these things?’ So they were offended at Him.  But Jesus said to them, ‘A prophet is not without honor except in his own country and in his own house.’ Now He did not do many mighty works there because of their unbelief.”  Matthew 13:53-58 (NKJV)

Jesus, our Lord and our Savior, the One who has come to set us, the captives, free, has a pointed and penetrating question for you and for me as found Matthew 16:15 (NKJV) which you will find at the end of this writing.  But, don’t get ahead of yourself and skip down to it because this is no ordinary question that we should answer it hastily and without reverent consideration.  No, my friend, this is THE seminal question of our lives.  Our place in eternity hangs in the balance as well as the path we take in the here and now.

How we answer this question affects the lives of those around us as well.  This is no small matter, this question and our answer to it.   Turning your attention to the image once again, I urge you to be thoughtful and introspective searching the depths of your heart as you examine your life for signs that you have lost your way by making yourself the Creator rather than the created.

Are there areas of your life where you have turned the table of Genesis 1:27 upside down and limited the unlimited God by placing Him in a box straight out of your own comfort zone rather than the true Jesus of the Bible?  Yet another insightful quote by John Eldredge from his book “Beautiful Outlaw” speaks to this when he says, “You will find Jesus pretty much as you expect to.”

In an effort to be vulnerable and transparent with you I embarrassingly must confess that when this God-in-the-box concept first entered my mind I vividly recall thinking, “Hmmmm…I wonder who this is intended for?”  Such was my pride that it wasn’t until sometime later that I realized it was intended for me, of course.  After all, it’s so much easier to see other’s shortcomings and faults rather than my own.  I’d be glad to show you yours when you have the time, by the way.

Pop goes the weasel.  Uncomfortable?  Fine.  A simple flick of the wrist and He’s securely stowed away back in the box.  Silence feels so much more golden when it’s accomplished according to our own terms.

So, now the time has come for Jesus’s question.  Now, imagine for the next few moments that it’s just you and Jesus alone together in a beautiful, tranquil place with no other distractions.  Make it your favorite spot, one that feels sacred in its impact and importance to you.  We all have places like that in our hearts and minds.  Places that make you whisper out of sheer reverence if you can even speak at all.  Go there with the words of 1 Samuel 16:7 (NKJV) front and center in your mind and most importantly engraved on your heart, “but the Lord said to Samuel, ‘Do not look at his appearance or at his physical stature, because I have refused him.  For the Lord does not see as man sees; for man looks at the outward appearance, but the Lord looks at the heart.’”   That’s your heart He’s looking at, by the way.

Ever so gently Jesus takes you by the hand, looks deeply and earnestly into your eyes in an incredibly intimate one-on-one moment, pauses, and then gently parts the silence with a voice that penetrates the very depths of your soul asking,

Natalie Grant, “King of the World” (Be One, Deluxe Version)