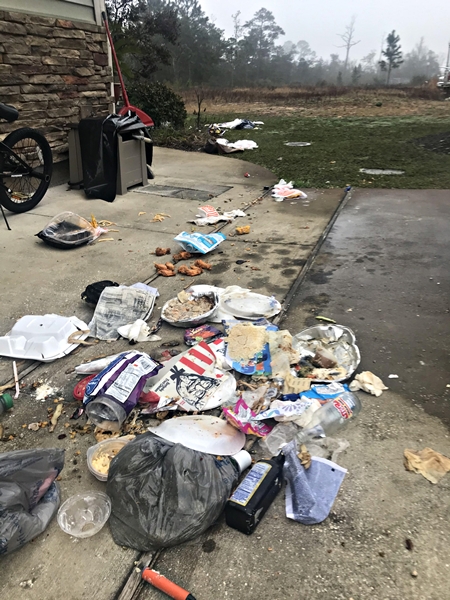 “I have found little that is ‘good’ about human beings on the whole. In my experience most of them are trash, no matter whether they publicly subscribe to this or that ethical doctrine or to none at all. That is something that you cannot say aloud, or perhaps even think.”  Sigmund Freud

We’ve all heard it said, “One man’s trash is another man’s treasure.”  I was recently blessed to consider this well-worn statement from a spiritual perspective.

Black bears are a pretty standard sight where I live.  They routinely show up in all of the various neighborhoods in the area in search of food.  Their favorite target?  The practically unlimited and readily available buffet of residential trash cans.

As you might guess, bears are sloppy diners.  They’re never worried about the mess their uninvited foraging leaves behind, which can be pretty substantial if they happen upon a heavily loaded garbage can.

A few weeks ago, the bears treated themselves to an early breakfast at the front of our subdivision.  The aftermath of the bear’s morning celebration stretched from one side of the road to the other, resulting in one resident, a lady, pretty overwhelmed with the clean-up task in front of her.

Upon seeing her predicament, I decided the right thing to do would be to lend her a helping hand.  I have to tell you that I did so with some reluctance because I knew this was a recurring problem for this family.  After all, they were known by all the neighbors never to secure their garbage cans overnight.  In other words, this wasn’t their first post-bear-buffet-clean-up rodeo.

To further add to my less-than-pure motives, as I was picking things up, another neighbor came up to me to point out there were more piles of garbage “over there between those houses and be sure not to miss them.”  And yes, you’d be right in guessing I got a bit Clint Eastwood-squint-eyed upon hearing that comment.  Fortunately, the sunglasses I was wearing at the time did an excellent job of hiding my displeasure over such a “helpful” suggestion.  She quickly added that she had wanted to help pick up, but her husband told her it wasn’t her problem to fix.  Again, let me applaud the unsung and often overlooked advantages wearing sunglasses brings to the table in such situations.

All that to say, my heart’s attitude had become increasingly in the wrong place as I worked my way through the piles of garbage randomly strewn about multiple front yards.  There was a growing grumbling and mumbling on my part each time I picked up a piece of trash. “This really isn’t my problem, so what am I doing here cleaning up someone else’s trash?”

And that’s when a whisper graciously redirected my attention from me to Jesus, saying, “Aren’t you thankful Jesus saw you as so much more than ‘not His trash, not His problem?’  How blessed you are that He didn’t walk away from your sinful mess but instead chose to give Himself up for you willingly.”

I can’t begin to tell you how wonderfully humbling that clarifying moment was for me.  My entire outlook changed from one of oppression to liberation.  My efforts were no longer burdensome, but instead, there was a newfound blessing to be experienced in the task that lay stretched out before me.  Who knew picking up trash could be so joyful?

“Jesus Christ knows the worst about you. Nonetheless, He is the one who loves you the most.”  A. W. Tozer

Friend, let there be no doubt in your mind and heart that when Jesus sees you, He doesn’t see you as the world does, or even perhaps as you see yourself.  You are not worthless trash that is better left untouched on the side of the road.  You are His creation of immeasurable value that is worth touching.  To Jesus, you are not just any treasure; you are His treasure, the reason He came into this world.

“For God so loved the world that He gave His only begotten Son, that whoever believes in Him should not perish but have everlasting life.  For God did not send His Son into the world to condemn the world, but that the world through Him might be saved.”  John 3:16-17 (NKJV)

Casting Crowns, “Love Moved First” from the album, “Only Jesus.”