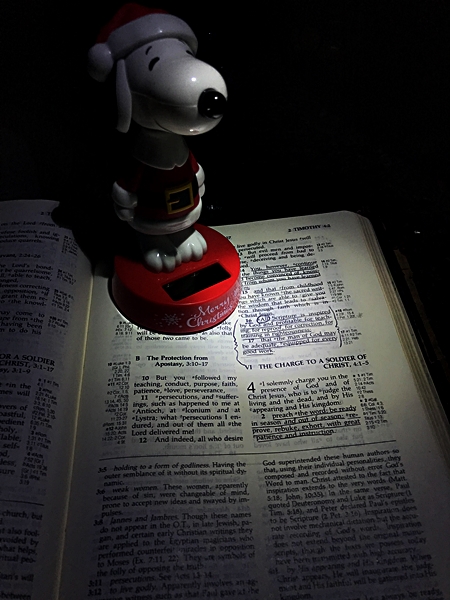 “Then Jesus spoke to them again, saying, ‘I am the light of the world. He who follows Me shall not walk in darkness, but have the light of life.’”  John 8:12 (NKJV)

And just like that, it turns out my most recent post, which I had thought would be my last post of the year, isn’t the last one, after all.  Surprize (wink)!  What can I say?  When the light of inspiration strikes, it buoyantly sets into motion a creative adventure with the Lord like none other for me.  I pray it is the same for you.

Recently we bought a cheap solar-powered Snoopy bobblehead.  We weren’t looking for him at the time, mind you, because he wasn’t even on our shopping list.  However, there he was on a shelf alongside a host of other bobbleheads, all seemingly laser-focused on capturing our attention with their almost hypnotic up and down movements.  It was like a bobblehead flash mob, but with one standout “star” in our eyes.  How could we resist, given that we love Snoopy and all things Charlie Brown?   Encouraged by Snoopy’s eager, nodding approval, we decided the right thing to do was take him home with us, and so we did.

Snoopy’s new home is on our kitchen counter-top.  Much to my delight, I’ve discovered that my daylight conversations with him are always positive and uplifting.  Indeed, watching his head always nod affirmatively is something that brightens my day.

I’ve noticed a few other things about Snoopy since he’s come to live with us.  One, when the lights are off, he’s motionless and has nothing to say.  Two, his head starts bobbing almost immediately as soon as the lights come on.  Lastly, the longer the lights are on, the more pronounced his head bobs up and down.  In short, no light amounts to no enthusiasm whatsoever, while more light equals visible, unmistakably passionate movement.

We can say the same about our walk with the Lord, can’t we?

“You were placed on earth to know God.  Everything else is secondary.”  Greg Laurie

The amount of enthusiasm, devotion, and passion we have for God and His Kingdom directly depends on how much and how often we bask in His light through prayer, Bible study, and other spiritually edifying choices that all result in authentic worship experience.

The truth is we are brought to a spiritual standstill when we are outside God’s presence and alone in the dark.   Our forward motion is non-existent.

“If we are unexcited Christians, we should go back and see what is wrong.”  Francis Schaeffer, The God Who Is There

Just as you do in all relationships, you have to invest time and energy in your relationship with God to reap the rewards; otherwise, negative consequences will arise.

“God is Spirit, and those who worship Him must worship in spirit and truth.”  John 4:24 (NKJV)

“He who is not with Me is against Me, and he who does not gather with Me scatters abroad.”  Matthew 12:30 (NKJV)

And so, the stage is set for the dramatic divide between darkness and light, stagnation and forward progress.

The more quality time we spend with Him, inevitably, the greater our enthusiasm and desire for all things of God.  His light amplifies our motion on His behalf and in His direction.

“Draw near to God and He will draw near to you. Cleanse your hands, you sinners; and purify your hearts, you double-minded.”  James 4:8 (NKJV)

“The Bible is the only book whose author is always present when one reads it.” Anonymous

“But He answered and said, “It is written, ‘Man shall not live by bread alone, but by every word that proceeds from the mouth of God.’ ”  Matthew 4:4 (NKJV)

The question on the table for all of us throughout each day is, “Are you headed in the Light direction?” Will we choose to nod in affirmation of Jesus, or will we stand stoically silent in the dark?

“Whoever comes to Me, and hears My sayings and does them, I will show you whom he is like: 48 He is like a man building a house, who dug deep and laid the foundation on the rock. And when the flood arose, the stream beat vehemently against that house, and could not shake it, for it was founded on the rock.” Luke 6:48 (NKJV)